Vizi Online Texts are engaging and self-paced. Students come to class better prepared, which gives teachers an opportunity to use class time differently. 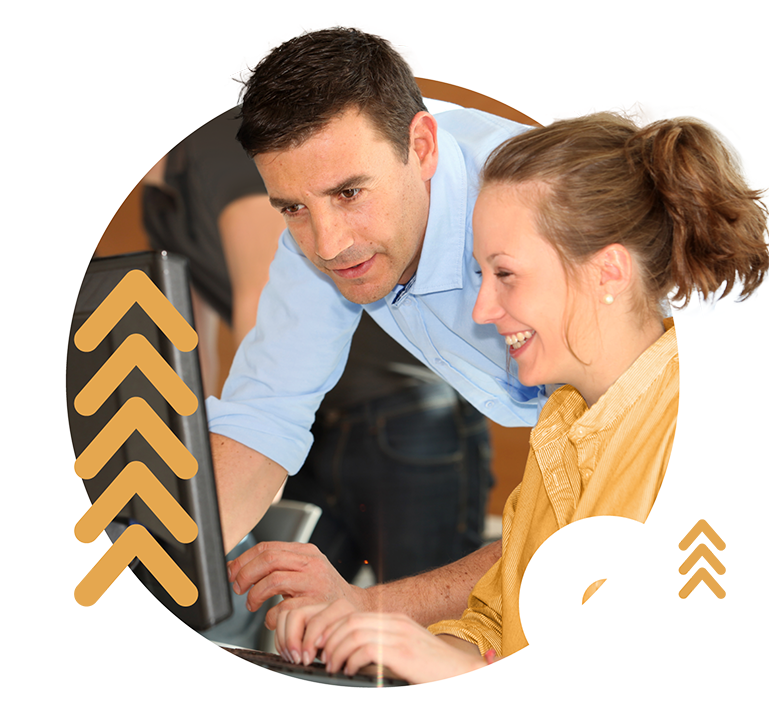 Dr. Darrell Butler, cognitive scientist and professor of psychology,  tested more than 450 students in a laboratory environment comparing Vizi text to traditional texts. The students were assigned to study either the Vizi text or a traditional text covering the same material, given 45 minutes to study, and then took identical examinations.

In all cases, students who used Vizi texts outperformed those who used traditional texts — in most cases by significant margins (as much as two full grades). 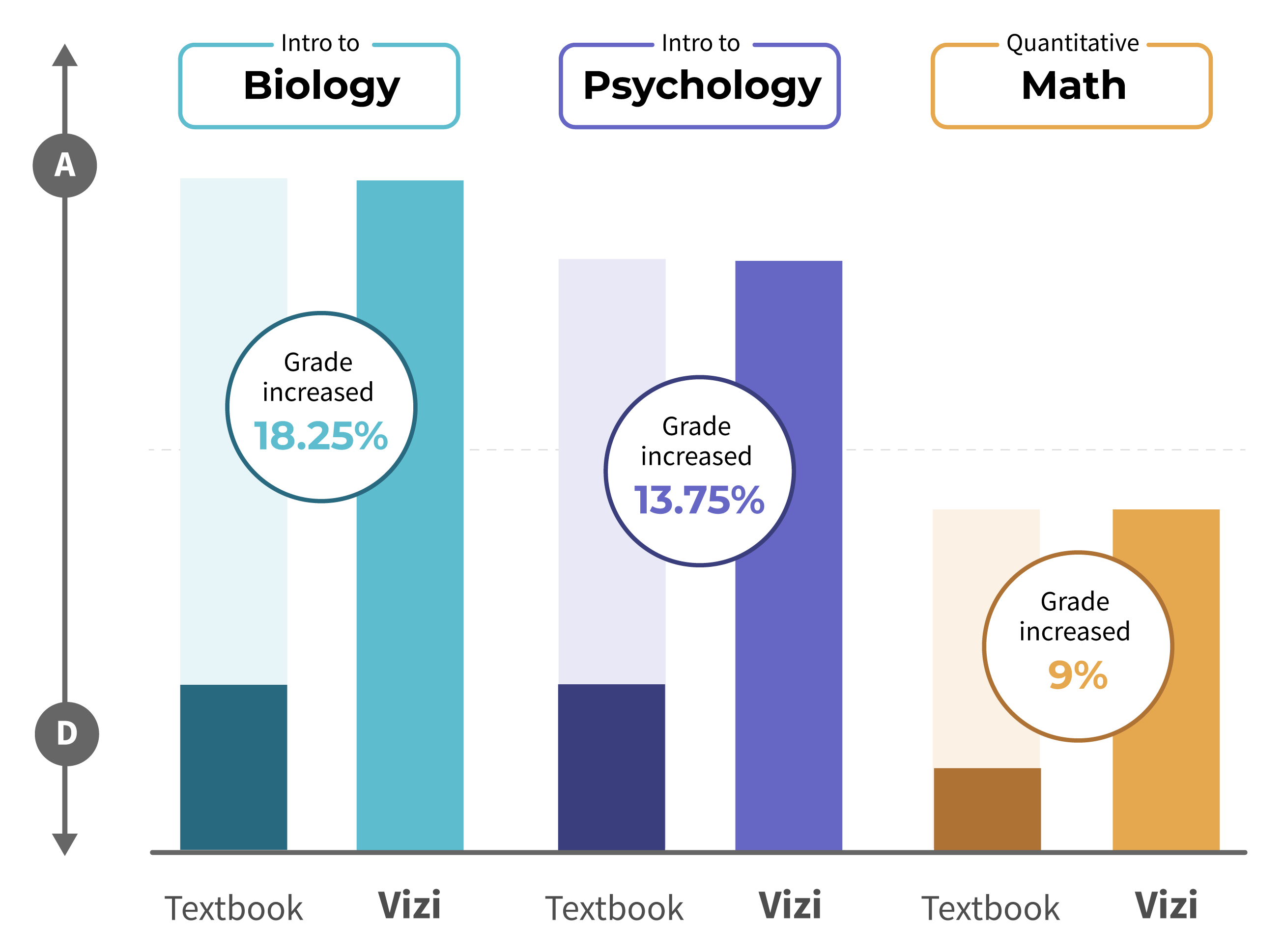 “A really great thing about Vizi is that it’s flexible, and individual teachers can choose to use it as they want to. They may have students use the video before presenting the material in class to give students a little preview of what’s coming or they can talk about a video in class and then students can go back and look at Vizi on their own as a review. “

Find Vizi easy to learn and use for their classes 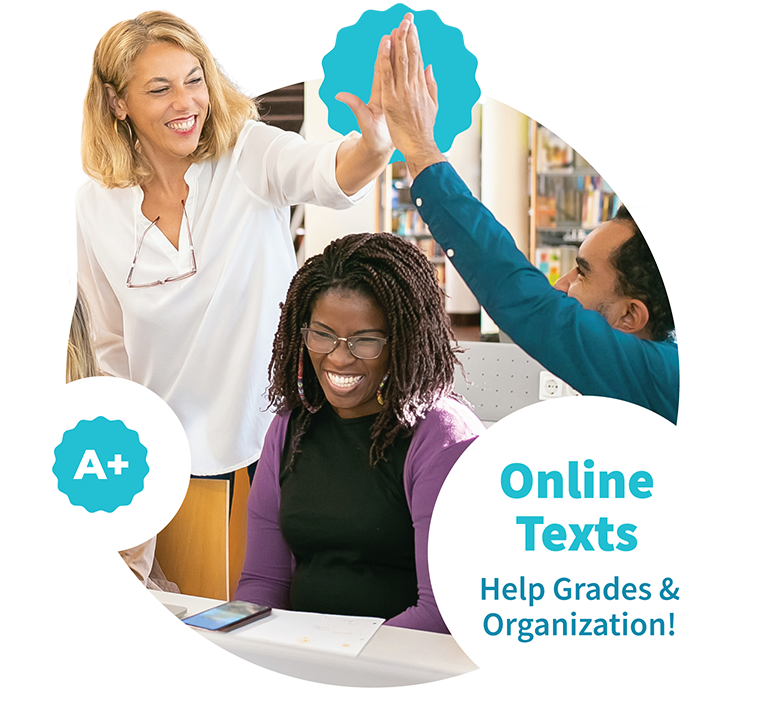 Find your subject
in our catalog

Vizi offers a wide variety of different class subjects for every learner. If we don’t have the topic you’re wanting, let us know!

Experiencing the rich multimedia Vizi interface provides students a cognitive framework that helps them organize and interpret information they will encounter in your lectures and assigned readings. Experiencing Vizi first will provide students with a foundation from which to build a deeper meaning.

Encourage students to take notes, ask questions, and talk to their
peers about the parts of Vizi they find helpful. Teach students to be as
repetitive as they need to be replay videos, revisit interactive
exercises, and review difficult concepts.

Assign points for completing assignments in Vizi and grade responses
to ensure student comprehension. Incorporate questions from the
content covered in Vizi into quiz and test questions given in class.
Award points to student demonstrating familiarity with the Vizi
content when responding to questions or discussions in class.

It sounds simple, but in today’s world students are bombarded with
information, and teachers are forced to compete for their attention.
Educators must convince students that the assignments matter. Make
it clear to students why you selected the Vizi lessons you did, as well
as the purpose, value, and relevance to the course. Make explicit
connections between the Vizi lesson and in-class activities, written
assignments, and exams.

Create a community of learners

By incorporating Vizi into the classroom, you can foster communities
of learners. Use segments of Vizi within the class to promote group
discussions and group activities. Leverage social media or learning
management systems to continue the conversation after class.

Vizi texts can be delivered through integration with a learning management system or through direct access.
We also offer a lesson preview for anyone interested in Vizi Online Text.

Much like students purchase assigned textbooks for a course, Vizi can be sold directly to students either online or through access codes at the bookstore.

Vizi can interface with most Learning Management System, allowing students to access their Vizi content directly from the LMS without creating a new account and separately logging In.

Curious if Vizi is a good fit for your class? View our commonly asked questions for more information!

If your question is not included here, contact us.  We are happy to assist you.

Do my students still need their traditional textbooks?

Vizi is textbook-independent so it can be paired with any textbook or supplemental reading that you choose.
In some cases, teachers replace the traditional textbook with Vizi.

Vizi provides a dashboard to view assignments aswers, the time the answer was submitted, and recommended responses, to use in grading. It also offers the ability to
sort responses by student or assignment. You can view the responses online, or export the responses into a
PDF or Excel file.

Will I know if my students are using Vizi?

Vizi offers analytics for instructors to monitor student engagement with each lesson as well as general data about daily student interaction.

Who should students contact if they experience a technical issue?

Vizi is sophisticated technology. While the interface has been tested, as with any digital platform, it is possible
for technical errors to occur. The best place to start when an error occurs is to view our Help Center and if a solution for the problem isn’t listed, submit a support ticket.